What to consider when specifying Ethernet patch cables

In the cabling of a network, humble patch cords are often considered a minor but necessary component whose performance is not all that important. After all, they are only a few inches or a few meters long, so how much damage could they do? Unfortunately, the answer is quite a lot, which is why patch cords are considered the weakest links in the cabling system. This is often because of inferior or sub-standard connectors, cable and cable assembly processes. In fact, the Telecommunications Industry Association (TIA) notes that with a local area network (LAN) problem, the first places to inspect are the patch cables. So, writing a patch cord specification should be more than a cursory project. With this in mind, the following recommendations collectively will ensure that cable specifications will guide the people assembling  cordsets to make a quality product that  customers can rely on to deliver peak performance throughout the entire network.

First, it is important to remember that as Ethernet data rates soar, so does operating frequency. For example, Cat 5e has a minimum frequency of 100 MHz while Cat 6a operates to at least 500 MHz, and when Cat 8 arrives it will operate at a blistering 2 GHz. At that point, Ethernet networks will be operating at the same frequencies as many cellular systems. This is important because, at microwave frequencies (or even 500 MHz), the design and fabrication of a cable and its constituent components become much more challenging. 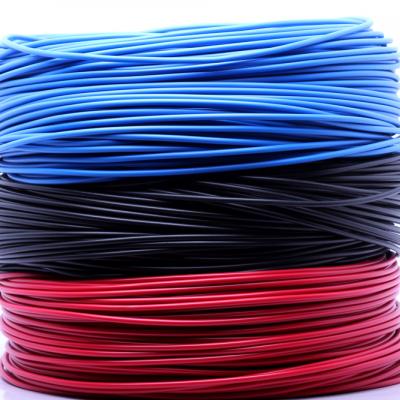 Figure 1. While it may be appealing to choose a cable based primarily on cost, only patch cables that have undergone extensive testing should be considered. Source: Quabbin Wire & Cable

Factors such as lower levels of insertion loss, return loss, as well as crosstalk (including alien or external crosstalk), and maintaining a stable impedance become obstacles to meeting the requirements of the latest standards. The takeaway from this is that while it may be appealing to specify a cable or connector based primarily on cost, users will soon regret that decision. Only patch cables that have undergone extensive testing and state this on the cable or connectors data sheet should be considered.

For example, some patch cables use aluminum instead of copper wire dipped in a thin coating of copper to cut costs. They are not difficult to identify: Scrape the conductor and the copper will likely flake off and expose the metal core. Not only do cables like this degrade performance, they are also more fragile because temperature increases caused by their higher resistance make them brittle. And because their tensile strength is lower than that of copper, their bend radius is less. In contrast, a pure copper patch cable retains its shape over temperature. And finally, these cables violate TIA standards and others for Cat 5e, Cat 6 and Cat 6a cables.

Corrosion: The enemy of performance

Another factor to consider is whether to choose bare wire or plated wire. Ideally, both can deliver similar electrical performance, but in practice, oxidation needs to be considered. Oxidation occurs when oxygen comes into contact with certain metals, including copper. When first installed, high-quality bare copper wire is (or should be) pristine. But copper oxidizes rapidly, and over time the oxygen will combine with the metal at an atomic level, forming an oxide that weakens it. The catalyst for this is water that even in minute quantities penetrates the copper and then works with other elements to create an acid that eats away at it, exposing more surface area for attack. Saltwater is far worse because sodium accelerates the chemical reaction, ultimately causing corrosion. Eventually, the cable will be destroyed with obvious results.

But long before the patch cable actually fails, the cable’s performance will degrade because of the skin effect, which is the tendency of electric current to concentrate near the surface of a conductor. This occurs less at lower frequencies and increases as the operating frequency increases. At data rates of gigabits per second and a high operating frequency, the skin effect becomes pronounced.

As a result, the signal is effectively plowing its way through the oxidation on the surface, reducing the metal’s conductivity, increasing its insertion loss and degrading overall performance. This scenario also applies not only to solid wire but also to stranded wires that oxidize even faster because they have more surface area. In short, oxidation and corrosion are the primary enemies of patch cable performance and longevity, and their effects continue unseen over time and are incredibly difficult to mitigate.

The solution is plating the wire (or wires) — coating the copper with another metal that makes the conductor’s performance predictable — which increases its operating life and dramatically reduces oxidation and corrosion. This is not the same as coating a wire with copper as described earlier, but rather a precision process conducted under stringent conditions using metallic bonding (cold welding). As explained later, with cold welding, clean, flat surfaces of similar metal firmly adhere when brought into contact in a vacuum at the interface between the two.

There are several metal choices for plating wire — silver, gold and tin— and each has distinct properties. Silver is very conductive and expensive, but can also oxidize. Meanwhile, gold is less conductive and does not tarnish, but gold prices are near their all-time high, making it even more expensive.

This leaves tin, which is very stable, with high electrical performance and low cost. A study conducted by Quabbin Wire & Cable showed that over 12 to 13 years, bare copper patch cable fails insertion loss tests far more often than tinned cable, which is why the company uses it exclusively throughout its product line.

Unlike fusion-welding, there is no molten phase required to make the bond (cold welding). The metal is instead bonded by sharing electrons, so groups of atoms lose electrons to form positive ions. These ions are surrounded by and share the lost electrons with the resulting ion attachment held in place by electrostatic interactions between them, forming a metallic bond. Metallic bonding ensures malleability, ductility, and thermal and electrical conductivity.

These are just some of the many reasons why problems arise at the interface between the connector and the cable, which is not surprising because this is where the wires are exposed and the connection is made by hand using a crimper or other compression tool. Consequently, it is very important to ensure that the connector is of good quality and the installation process is performed properly. ANSI/TIA 568 2.D, UL 3992, ANSI/TI A-1096-A, IEC 60603-7:2020 and other standards clearly define the physical, electrical and transmission performance of RJ45 connectors, as well as proper procedures for installations.

Like patch cables, choose only connectors from established companies that manufacture their products in accordance with these standards, verification of which should be stated on the package. Better yet, visit the company’s website, which in the case of less-reputable companies may reveal their shortcomings. Good connectors may cost a bit more, but this is insignificant when compared to the assurance that they will be able to maintain system performance over time and many matings.

The issues frequently encountered at the interface concern loose mating of the connector and poor installation practice, but once again, oxidation and corrosion play a role. There are two basic types of RJ45 connectors: crimped and insulation-displacement. The crimped type makes the connection between cable and connector by crimping the two parts of the connector together and crimping the wires to the connector’s contacts. Although this requires that the cables be stripped, a decent crimping tool costs $25 or less and ensures that the insulator of each wire is stripped at an equal amount.

The process is different for insulation-displacement connectors because one or more blades are forced through an insulated (non-stripped) wire into the wire. When this connection is properly made, the approach yields a reliable gas-tight connection. But if there is oxidation on the wire, this metallic bonding may not take place, reducing conductivity and increasing insertion loss. At installation, this might not seriously affect performance, but it is likely to as the connection ages. At this point, the interface would not pass a contact-resistance test.

Testing is one of the most important considerations when creating a specification document. Before the TIA and Electronic Industries Association created the industry's first patch cord test procedure for use in manufacturing (TIA/EIA-568-B-2-1 Annex J), there was no industry-wide standard by which patch cables should be tested. As a result, some manufacturers stated they performed certain tests when they did not or they did not follow accepted procedures, which they could accomplish because their customers did not have the test equipment or expertise to perform the tests themselves. In other words, customers had to take the manufacturer’s word for it. The patch cord test procedure ensures this practice, essentially forcing the industry to be more honest.

Today, manufacturers of quality patch cables perform an extensive battery of tests in compliance with this and other standards. As the use of higher speed network protocols such as 2.5G Base -T, 5G Base-T and 10G Base-T become more common the performance of the patch cords in a channel becomes more critical. For example, test reports such as the one from Quabbin, shown in Figure 2, show the results of electrical measurements. The company offers training and support to its assembly partners to ensure that its patch cords are fully tested and have the performance margin required to be interoperable in most Cat 6 and Cat 6a channels while also being backward-compatible with Cat 5e and earlier network standards. Detailed information about these tests is available on the Quabbin website. 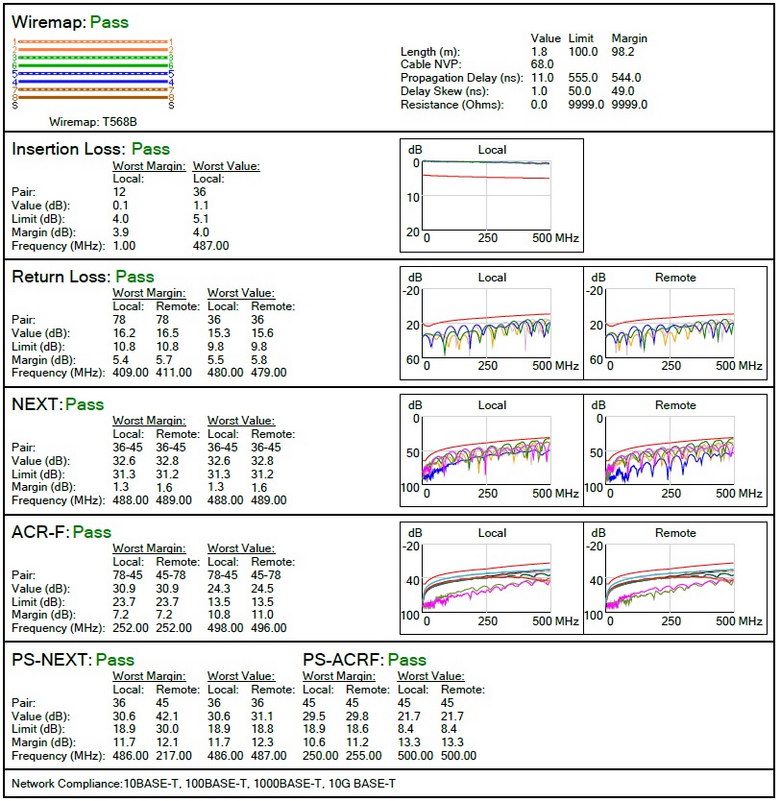 Patch cords are a crucial component in any network, considering there are various ways they can fail and there can be hundreds of them in a given installation. Replacing them is a time-consuming procedure. While there is no guarantee that a patch cord will never fail, specifying cables and connectors from established sources that have many years or decades of experience reduces the chance of failure throughout operating life.

The standards described in this article are not all-inclusive, and others exist that cover operational conditions such as harsh environments, low smoke zero halogen (LSZH) requirements and their performance during a fire.