Much of the newest audio and visual (A/V) hardware is digital rather than analog, providing benefits of faster processing speeds, lower cost connectivity, improved reliability, less noise, and truer reproduction. This article discusses various digital A/V applications and examines how commercial data cables may be modified and used for interconnection.

Migration from Analog to Digital

As the transition to digital A/V takes place, commercial network data cables are being used, replacing coaxial and analog copper cabling. Both unshielded pair (UTP) and shielded pair (ScTP) cable designs are being adapted for these applications, however, most of these systems are using the simpler and lower cost UTP designs. These cables are 4-pair 24 AWG, 100 Ohm, balanced pair constructions that meet the specifications defined by the TIA's (Telecommunications Industry Association) 568-B.2 standard. Most current A/V applications fall well within the TIA's defined bandwidth and frequency ranges, so cost-effective Category cabling is rapidly being adapted to interconnect the newest hardware.

For those not familiar with the TIA-568-B.2 commercial networking standard, the table below provides a brief overview of the cable “Categories” and their applications.

As you see from the above table, each successive Category of cable can transmit faster protocols, has greater bandwidth, and is characterized to higher test frequencies. Category 5 currently has the largest installed base, but it has been replaced by Cat 5e (enhanced) in the TIA document. Cat 5e has more difficult test parameters, enabling a maximum length minimally compliant 5e channel to transmit 1000Base-T Ethernet (1000 megabit/second). The Category 6A copper cable, connector, and other component requirements are currently being balloted but the IEEE has defined the 10GBase-T (10 gigabit/second Ethernet) signaling method that will run on a 100 meter Cat 6A UTP channel. (Very impressive for an unshielded 4-pair 24 AWG copper cable!) Copper interconnected 10 Gigabit Ethernet chip sets and other hardware are available today.

The TIA-568-B.2 standard defines extensive transmission requirements that each Category cable must meet or exceed across the frequency range listed. These include pair-to-pair crosstalk, attenuation (or insertion loss), attenuation to crosstalk ratio (signal to noise ratio), impedance, return loss, balance, delay skew, and even alien crosstalk (noise from adjacent cables). Moreover, many of the noise measurements are defined as the power-sum from the 3 other pairs within the cable. These performance criteria are just as important for successful A/V implementation as they are for successful Ethernet transmission; especially return loss, delay skew, and attenuation.

Return loss is a measure of signal echo or return created by cable impedance variations, component mismatches, or defects in the cabling/connector system. Too much return or echo interferes with the near-end signal processor and also affects the signal being transmitted. Delay skew measures timing differences pair-to-pair over long transmission distances. Skew must be minimal for some video applications such as RGB (red, green, blue) where color signals are transmitted through separate pairs and must arrive at the other end in “sync”. Attenuation or signal loss determines how long the cabling length may be for a given application and how efficient the receiver must be at recovering the diminished signal.

Another benefit of “balanced” pair UTP cables is their resistance to electromagnetic interference (EMI), even though they are not shielded. A cable with perfect “balance” would neither radiate nor absorb energy due to undesired coupling. Achieving this in the real world is impossible; however, Addendum 9 of TIA-568-B.2 details balance requirements and measurement procedures for cable and connectors through 250 MHz. This requirement is difficult, but cable manufacturers have optimized their pair designs to comply.

The graph above shows typical longitudinal conversion loss or balance for Quabbin's 2-pair Cat 5e cable. It has better than 60 dB balance through 10 MHz. Balance is achieved by precise manufacturing processes, resulting in pair components that are virtually identical. The resulting cable has very low return loss and a very stable capacitance along its length. Properly balanced pairs also make a balun's job easier because the balun does not have to deal with extraneous noise absorbed by the cable. The next section of this article discusses baluns in greater detail.

Many existing video applications use 75 Ohm, unbalanced coaxial cable and connectors. With properly designed baluns you can substitute balanced 100 Ohm twisted pair cabling. A “balun” is so named because the device matches BALanced cable or gear with UNbalanced. The devices allow transmission between different impedance cabling with minimal echo or return loss.

Most Analog video installations as used in airports, schools, and security systems use simple point-to-point coaxial cabling where each camera is connected by a single coaxial cable, and powered locally. Using baluns allows transmission over a single balanced pair with the extra pairs available for powering motion motors or other controls. These video systems usually operate using bandwidth from DC to less than 5 MHz. Twisted pair technology can easily provide the bandwidth, but the cables must be used with low frequency baluns which are available for specific video applications.

Proper system design using twisted pair can provide high quality images for the common frame speeds and required line resolutions for analog video applications including TV monitors, S-Video, and even RGB (component color) image editing. As mentioned above, delay skew or signal timing differences must be controlled for successful RGB processing. The maximum delay skew allowed between all 4-pairs as defined in the TIA standard is 40 nanoseconds (nsec) at 100 meters, which is the default timing difference many use as their RGB requirement at any distance. The nominal measured skew for Quabbin's Category 5e flexible patch cable is typically 10 nsec, as illustrated in the graph below. This means a typical Quabbin Cat 5e cable could be 1300 ft long before it exceeded the RGB skew requirements, however the attenuation and other characteristics of the cable must also be considered. Also, compared to a coaxial bundle for RGB processing, a 4-pair UTP cable is considerably smaller, lighter, less expensive, and the component pairs do not have to be trimmed to length to match delays. 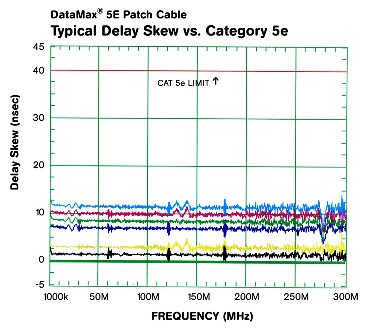 Digital video hardware is rapidly replacing analog for broadcast quality applications. Much of the newest gear is ported to accept either coax or twisted pair and some balun manufacturers have introduced baluns specifically for digital video. Most digital video requires bit rates and bandwidths considerably higher than analog, typically 150 to 200 Mbps and 150 MHz bandwidth. Video compression schemes and reduced frame rates can reduce these requirements, but Category 6 and 6A cable can easily provide more than enough headroom for a high quality image.

The Audio Engineering Society and the European Broadcast Union jointly established requirements for transmitting digital audio signals using twisted pair cabling. These are referred to as AES/EBU standards. The cable defined is a 110 Ohm shielded pair design, with each pair handling one or two audio channels. AES/EBU also specifies audio signals be sampled at frequencies that range from approximately 30 KHz to 200 KHz, with a bandwidth of 4 MHz at the low end and 24.6 MHz at the highest sampling rate. [A version of the AES/EBU format, called S/PDIF (Sony Phillips Digital Interconnect Format), is used for consumer-gear. It will not be discussed in this article.]

The AES/EBU cable electrical requirements are very loose, especially impedance which is 110 Ohms +/- 20%. Thus, cable pairs with impedance from 88 Ohms to 132 Ohms qualify. However, if one were to interconnect a digital audio system using cables with such a wide impedance difference, the resulting return loss (RL) noise and potential signal errors would be large, especially at higher frequencies. The reflection losses would be even worse if analog audio cable (with typical impedance of 50 Ohms) were intermixed with digital.

You will likely find a loudspeaker or microphone at the ends of a digital audio system. The amplifiers, mixers, and other equipment in the middle of the system have digital input/output and are processing digital signals, but are the speakers or microphones 100% “digital”? The answer is, “Almost.”

Fundamentally, sound is analog. Our voice box, our ear, a sonar array, or a musical instrument creates pressure variations or receives them in some medium (usually air). In a digital audio system these analog vibrations are transformed into digital information at or after the microphone or back into analog air vibrations at the speaker.

Most of today's digital microphones capture minute air vibrations with a sensitive capacitive electret condenser, same as an analog microphone. The electret transforms air pressure changes into electrical voltage variations, but these analog voltages are not transmitted through a cable to be amplified as in an analog microphone. Instead, within millimeters inside the microphone, they are immediately sampled and transformed into digital information by an analog/digital converter (ADC) chip set. Inexpensive ADC chips use “delta-sigma” circuitry to sample and convert the analog voltages to digital output. These chips are widely used for high resolution, low frequency applications such as speech and audio in cell phones and other portable voice gear.

Digital microphones' advantages are that they eliminate preamps and there is no noisy analog microphone cable. That cable is replaced by an AES/EBU rated twisted pair cable that also supplies low power and digital timing needed if multiple microphones are being used.

Speakers have not evolved digitally as far as microphones. The biggest hurdle is how a speaker converts electrical energy into sound. Most use a moving electrical coil (driver) that is attached to a larger membrane or diaphragm. The moving diaphragm in turn creates air pressure variations or sound. Sophisticated speaker systems combine small, mid, and large sized speakers to reproduce high, mid and low frequency sounds respectively. The input electrical signal is split by a passive electrical circuit (called a crossover) and routed to the appropriate speaker.

Some speaker manufacturers have introduced “digital” high-end speaker systems that are ported to accept AES/EBU digital input. This signal is processed through active digital crossover circuitry, digital to analog converters, and power amplifiers; all within the speaker enclosure. The result is a pricey high performance speaker system, but the final sound output is through an analog driver. So far no one has produced a cost effective and efficient digital driver.

This article has briefly outlined digital audio and visual applications, explained the AES/EBU specifications, and shown that commercial Category 5e and 6 meets these requirements. However, commercial cable is installed in a relatively protected environment compared to many A/V applications. Commercial data installations are relatively static, the cable is not mechanically abused, and the cable is never exposed to temperature extremes. 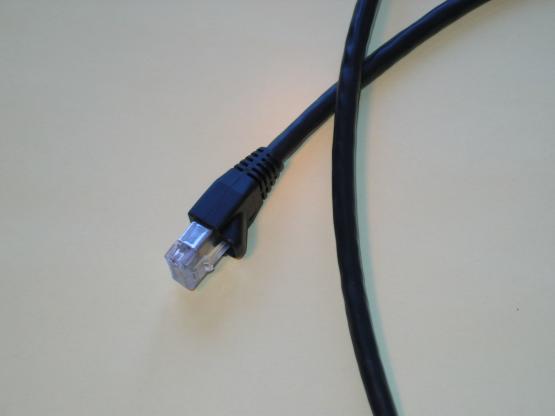 In many A/V applications the cable may be repeatedly flexed, removed/reinstalled, subjected to outdoor ambient temperatures, abraded, or crushed. The photo above illustrates a Quabbin DataMax® Extreme cable with a pressured polyurethane jacket. This construction combines flexibility, toughness, long flex-life, plus resistance to moisture and chemicals. This durable cable will survive in a harsh environment and continue to transmit reliable high-frequency data. For more information on this family of cables, click on the link above.

Polyurethane data cables are just one example of special jacketed constructions Quabbin has designed for A/V applications. Others include flexible cables with colored matte-finished PVC jackets for audio applications, flexible single pair for digital patching applications, plus many more.