Data cords abound, but coil data cords that are reliable and meet existing standards have been missing from the scene – until now.

Coil cables are unparalleled in certain applications: car charging, on electric guitars to give musicians mobility and as the wired connection between the body and receiver of pre-cordless phones

Given the spring-like retraction, far reach and flexibility of coil cable design, there are certain applications where they are optimal. The extending design provides wired electronics a long range from components or power sources, while also organizing the excess wire and reducing tripping hazards for people. These cables are common for signals, power, data or all three. However, as intuitively beneficial as they could be for data applications, coil cables have been problematic. 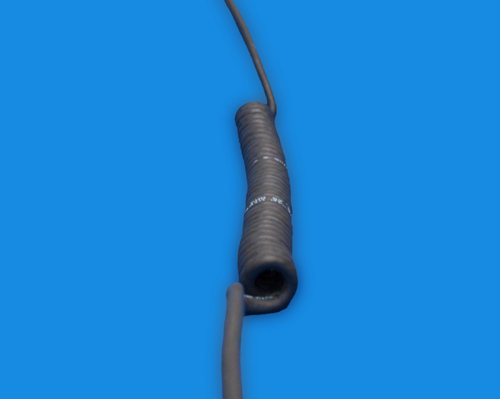 Traditionally, data-transmitting coiled cables have fallen short in electrical performance. This is because vendors have typically repurposed standard cable designs for this application, instead of developing a dedicated solution for the rigors of data transmission. The traditional approach can work in some cases. Yet, the shortcomings become evident when one or more components in the target system change, causing issues in the cord, ranging from malfunction to unreliability. Historically, it has been difficult to create coiled data cables compliant with standards, especially after numerous flexing cycles.

Although there are recognized problems for coil cord use outside of charging and connector-based applications, there are many uses where a coil cord is preferable.

All of these applications can benefit from a cord that extends and then neatly recoils itself. Unfortunately, there was no legitimate CAT 5e coil cord on the market, with legitimacy determined by conforming to standards. Data cords abound, but coil data cords that are reliable and meet existing standards have been missing from the scene – until now.

TIA-568 is one of the most commonly used standard sets in this industry. These address commercial building cabling for telecom products and services, enabling the design and implementation of commercial-structured cabling systems.

Nearly 15 years ago, the Telecommunications Industry Association (TIA) issued the industry's first patch cord test procedure (TIA/EIA-568-B.2-1, Annex J). The costly procedure was based on a network analyzer, complex fixturing and highly trained personnel. Patch cord assembly suppliers seldom invested in the equipment or staff necessary for proper testing and it was unlikely that their customers would test the cords as well. The result of the lack of testing is seen when open-market CAT 5e and 6 patch cords were finally tested, proving that 70% fail to meet the TIA's performance requirements.

The availability of a simple, accurate and cost-effective cord test has changed the playing field and forced the patch cord market, including those claiming coil cord specifications, to become honest. Now, cord manufacturers can easily test and verify performance, the market can finally demand it and crucially, it is verifiable by installers and users.

Quabbin Wire & Cable sought and developed a data-specific coiled cable from the product’s inception. The design targets purchasers and specifiers of handheld devices, users of cable-on-a-reel or other retractable cable devices and any industrial customer with space constraints, as well as cable assemblers and assembly houses. Most importantly, Quabbin innovated the only coil data cord on the market that is TIA-568B compliant.

Quabbin, a specialist in stranded copper data cables, created unique coiled cord products within that specialty. Quabbin coil cord is configured in a certain way so applications will dictate how tightly wound the coil will be.

The following matrix is designed to assist engineers in establishing their requirements as to: 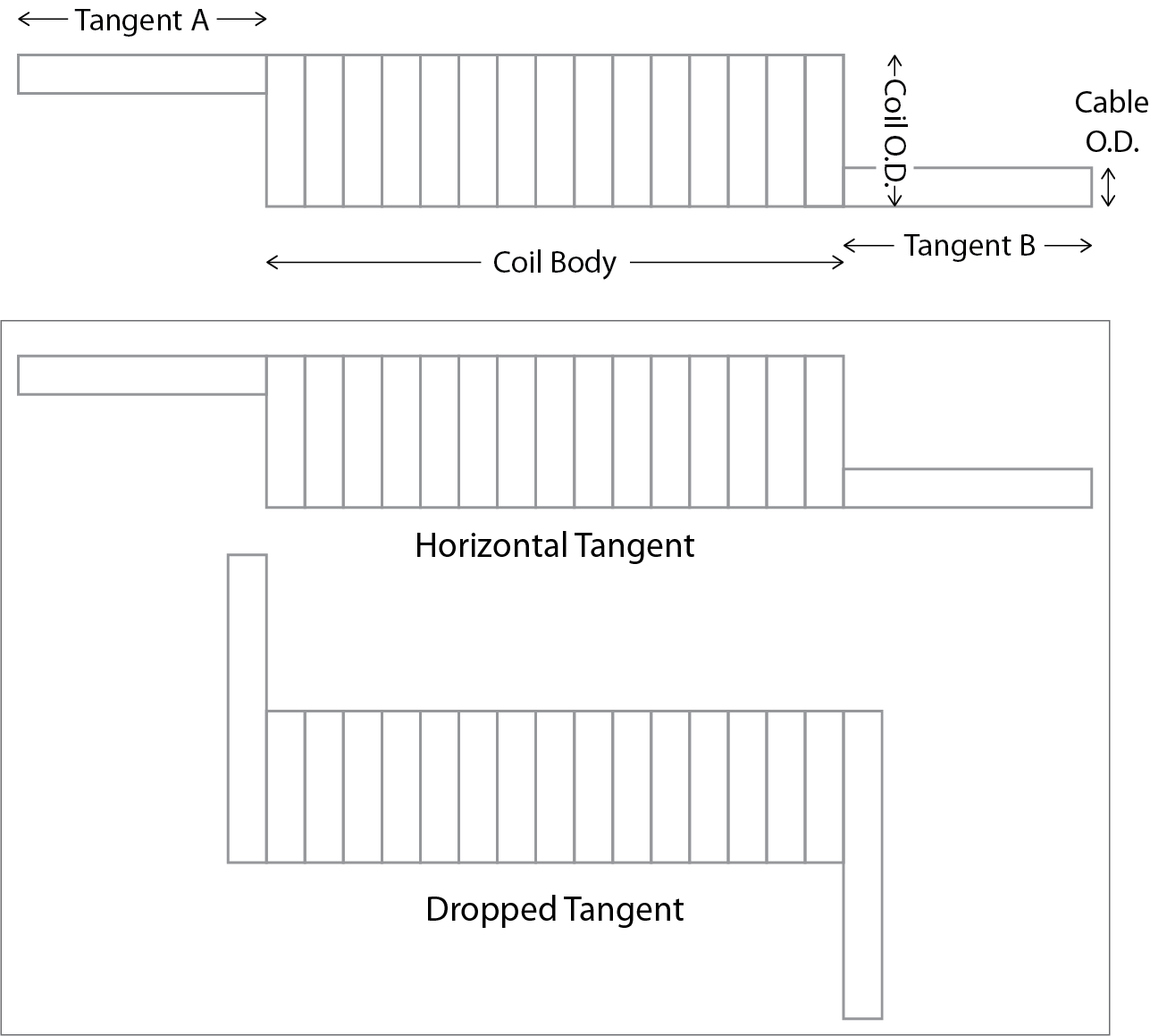 The following plots show that Quabbin coiled cables comply with the TIA standard: 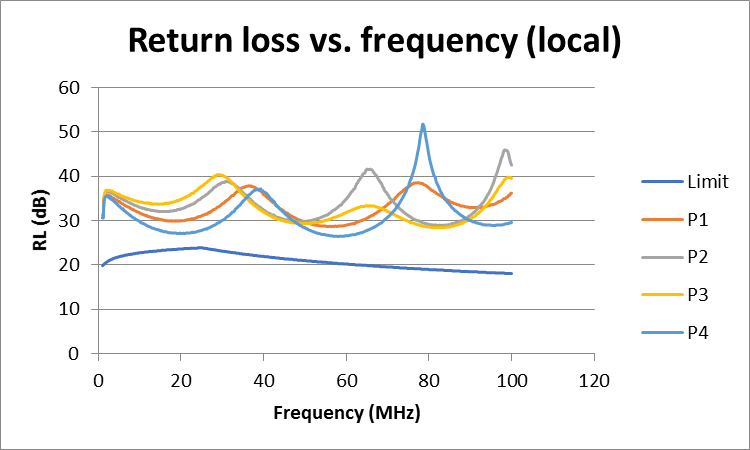 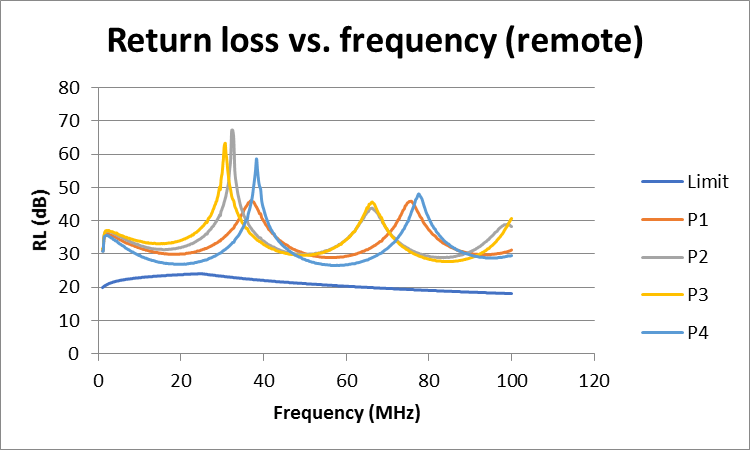 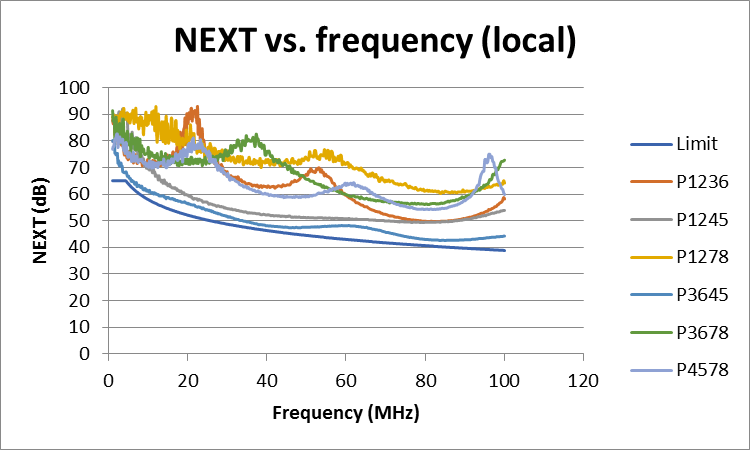 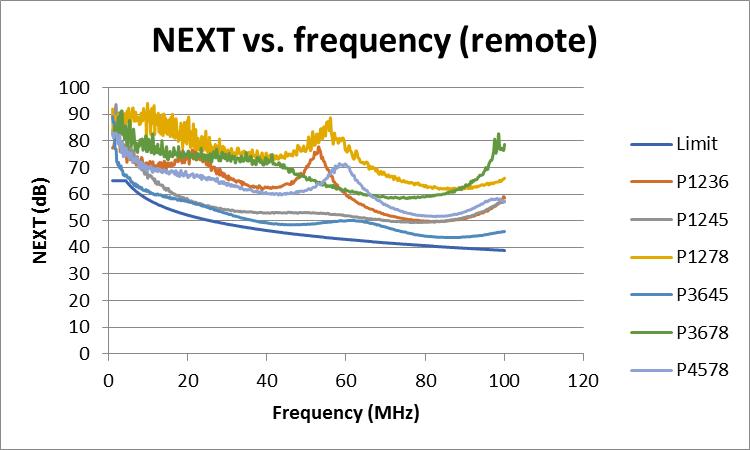 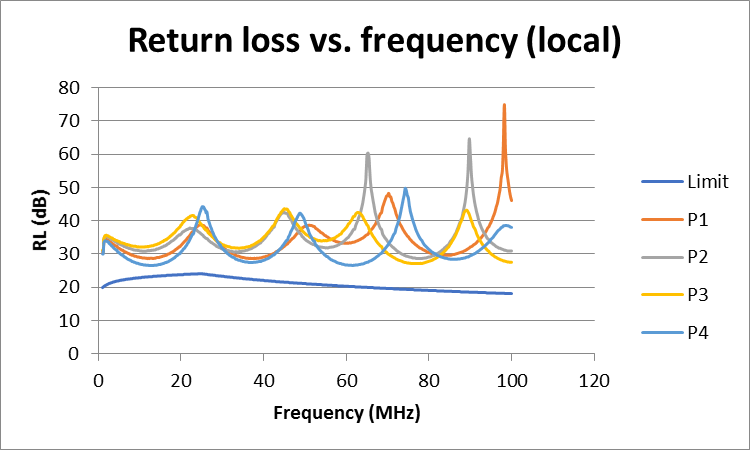 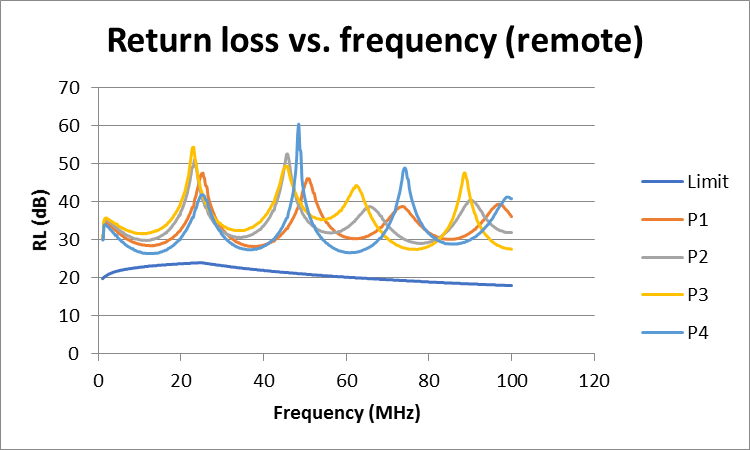 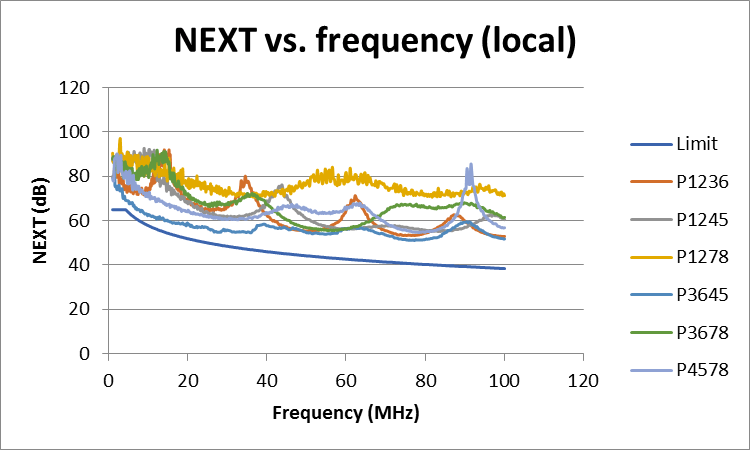 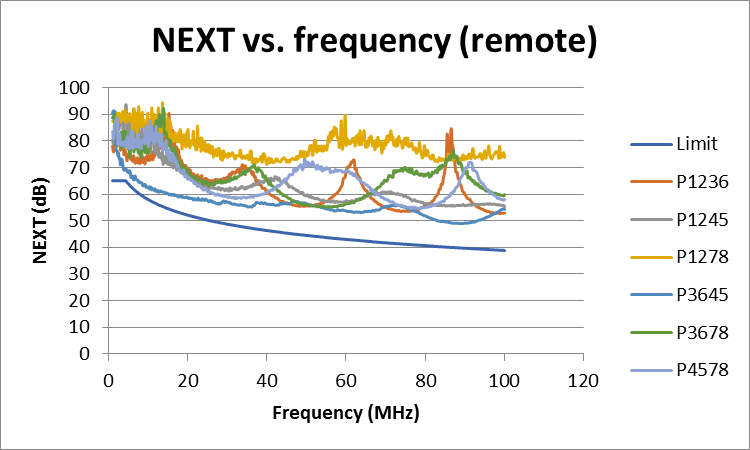 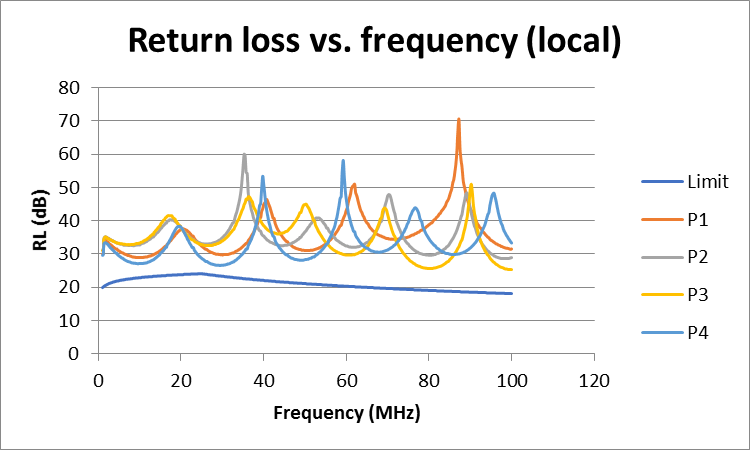 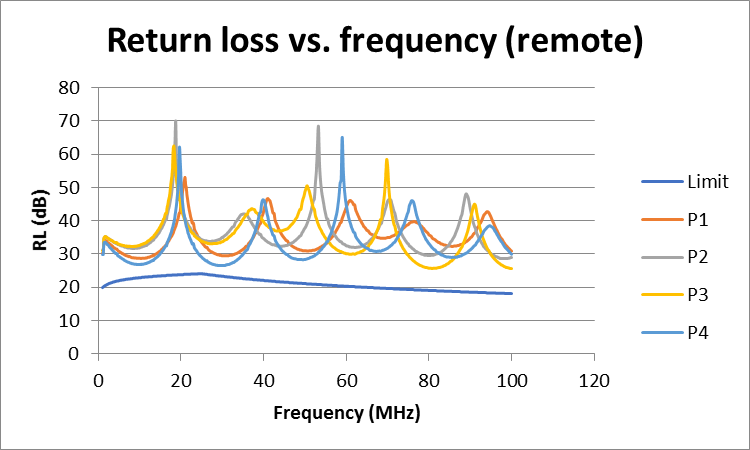 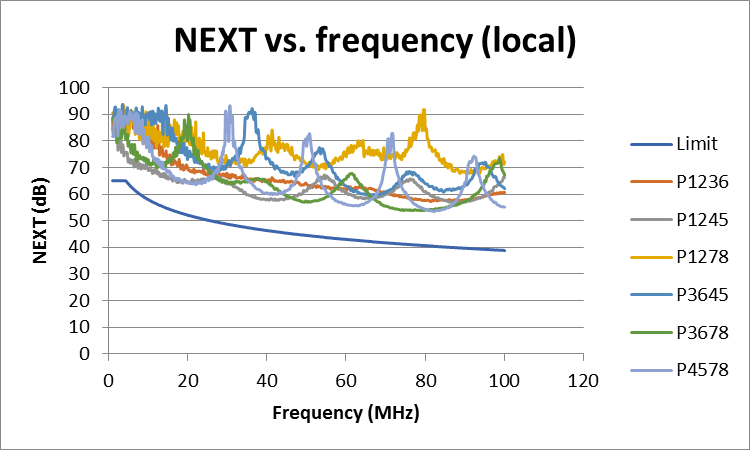 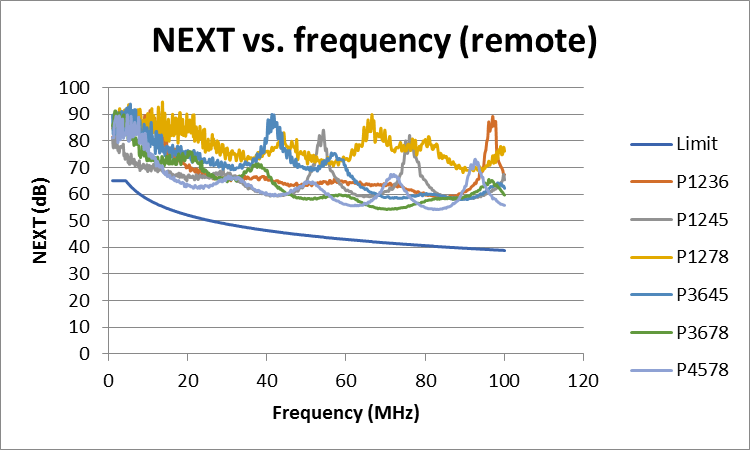 A recent test report proves that standards compliance focuses on the destructive forces induced on a coil cord, which exposed it to continuous extension and contraction over a period. The goal of the test is to determine the breaking point, where the cables no longer meet the electrical performance specifications or are mechanically compromised. 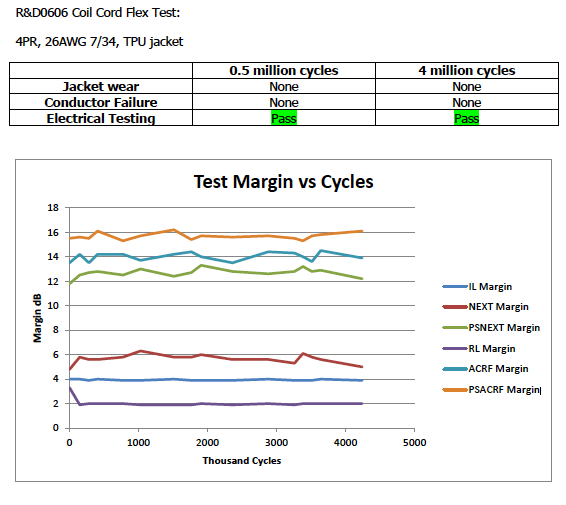 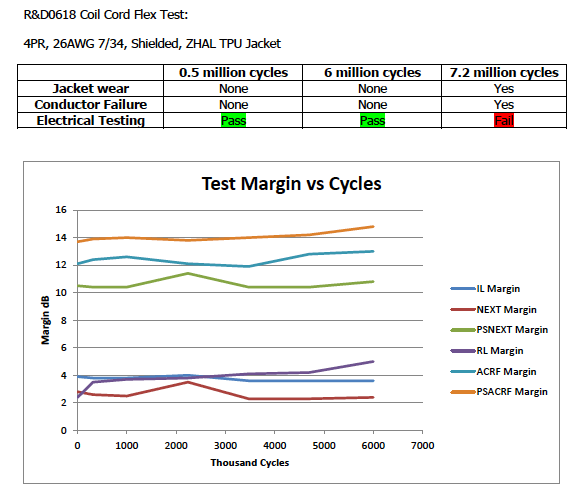 Quabbin is currently the only vendor able to provide test results that prove standards compliance. The Quabbin unshielded, TPU-jacketed cable passed electrical tests to a minimum of four million cycles. In comparison, the shielded, zero-halogen, TPU-jacketed cable passed electrical tests to six million cycles before the jacket cracked and the primes were damaged. The cables also had little to no deformation or sagging after the flex testing.

When installing these types of data cords, it is important to minimize stress concentration areas that can lead to electrical and mechanical failures.

Given the unreliability of coiled data cables, the marketplace has understandably avoided them. However, Quabbin’s vast design experience and expertise, especially in bend radius, is providing a variety of standards-compliant coiled cable versions to meet market demands. Quabbin is also able to customize versions of its coiled cables to meet the demands of specific customers.

The innovation that resulted in Quabbin’s unique cables raises the proverbial bar. Customers can demand data cords that endure the extra stretching and contracting without interfering with the quality or function of the cord itself.

Quabbin’s coiled data cables are specifically designed to be coiled rather than repurposing existing cable for use in data applications. The company expects to rapidly expand its data coiled cable line based on the needs of customers and assemblers and assembly houses.